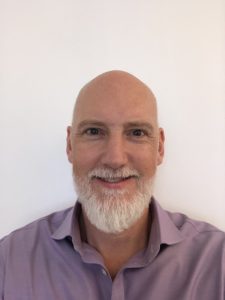 Finn grew up in Oxford, and started his career in health care as a nurse in the early 90s. After graduating he worked on an extremely busy surgical unit at Stoke Mandeville hospital and was responsible for the care of many critically ill patients.

Finn soon realised that he needed more autonomy as a health care professional, to be able to give his patients the time they needed and to be treated as individuals.

Finn started his full-time training at the British School of Osteopathy in 1998 and after qualifying with Honours soon moved to New Zealand, where he saw patients with a wide variety of problems, from professional dancers and sportsmen/women to long-term traumas and chronic pain. He also grew his special interest in pregnancy and paediatrics.

In 2007, Finn returned to the UK and opened his practice in London, and continued to develop his interest in pregnancy and paediatrics as well as trauma and complex problems. Finn did further post-graduate courses and worked on Harley Street for five years in a practice that specialised in pregnancy and paediatrics and gained experience treating some extremely difficult cases working closely with local obstetricians both in practice and in hospital. Finn also works closely with psychotherapists and trauma therapists helping people back into their bodies following trauma.

From 2007 – 2016, Finn taught osteopathy at under graduate level at Oxford Brookes University in the clinic department and was a university clinical examiner for six years.

From 2016 to present, Finn has taught at the University College of Osteopathy (previously the British School of Osteopathy) teaching and examining in technique at all levels and has led the more subtle side to techniques such as cranial, functional, and palpation. He also teaches professional and clinical competence to the final year students.

Finn is passionate about helping people, and is fascinated by what makes people tick. Many problems are complex and Finn enjoys helping people unravel the cause and seeing the people no one else can help. His special interests are trauma, pregnancy/post-natal and paediatrics and works with allied health professionals to offer the best care through this.

Finn has developed his skills and subtle but profound approach to treatment in these areas for nearly 20 years. He has taught pregnancy and post-natal care at under and post graduate levels, and has a specific interest in treating latch and breastfeeding issues with new-borns, working closely with leading lactation consultants both in London and Oxford.

Finn has settled back in Oxford now with his wife and two children, and is looking forward to helping you alongside the Helix House team.

Finn is a registered practitioner with most major insurance companies.