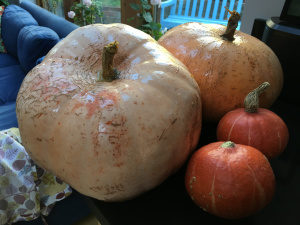 As October’s autumn fruitfulness is lost in November rains, December days get shorter and we start to look towards a midwinter feast to stave off the gloom. December is not only the lead up to Christmas, but these days it is also when thousands gather for two weeks at the United Nations Climate Change conference, this time COP 24 is in Katowice, Poland.

Sir David Attenborough has said in Katowice the other day that climate change is humanity's greatest threat in thousands of years.

The broadcaster said it could lead to the collapse of civilisations and the extinction of "much of the natural world".

Until very recently what to eat was less a matter of science or politics but very much a matter of culture and availability. However many factors, such as the slave trade and imperialism and, more recently, farm subsidies and industrial food processing, have changed that for us all.

the effect that has on our environment, not to mention our shameful relationship with the animal kingdom.

Vast swaths of tropical rainforests have been destroyed and converted to soya, palm oil and cattle production. Billions of us who previously, perhaps due to poverty, survived on a largely plant-based diet, with greater affluence have moved to a very highly processed diet of refined carbohydrates, dairy, sugars and processed animal products, sometimes called the meat-sweet diet. At first it seemed to be mostly a benign change that comes with greater choice and affluence. But gradually the consequences for us, our animals and the planet have come home to haunt us.

Not only was this new way of eating killing us it was also one of the most significant drivers for climate change, thanks to everything from deforestation to methane from cattle.

The single biggest way we can lessen our impact on the planet.

Strong, detailed evidence now tells us that greatly reducing meat and dairy consumption is the single biggest way individuals can lessen their impact on the planet. Without this, despite all the crucial changes that must be taken jointly through industry and governments, it will be quite impossible to tackle dangerous global warming that threatens us all, along with our children and their children.

We need urgently to change: One in nine of us are hungry

All these factors mean that now we need urgently to change almost all aspects of our food production and consumption if we are to, both stay within the earths environmental limits, and stop killing ourselves and our children with food related illnesses. Most countries around the world are unlikely to meet minimum nutritional targets to feed their people sustainable with healthy food. The United Nations reports that this profound change in global food and agricultural systems must occur urgently if we are to nourish the 815 million people, that is one in every nine people in the world who are hungry today and the additional 2 billion people expected to be undernourished by 2050.

For too long we have imagined that malnutrition was a problem exclusively of the underdeveloped world. Now we know better. As a recent global study reports, standards of diets around the world are “diabolical” and problems like obesity, anaemia and micronutrients deficiency are being neglected. Diet is the second highest risk factor for early death after smoking, globally. Either not enough food, but now, very rapidly, this is changing across much of the world to, not enough of the right kind of nutritious food and too much of the wrong, dead, junk kind.

“There is no income group that’s eating enough vegetables, whole grains or legumes.” Says Professor Hawkes, director of the centre for food policy at City University of London. “This is a problem that goes across income groups in all parts of the world.”

Five portions of fruit and veg a day is good for you, but ten are much better and could prevent up to 7.8 million premature deaths worldwide every year, say scientists. But, in the UK, only a quarter of us even reach five!

Health professionals often feel at a loss to stem the tide of lifestyle caused diseases that are now the major source of ill-health and death for many of the patients we see today. Pressure from medical students (http://nutritank.com) is even starting to drive change in medical schools to begin to prioritize nutrition and lifestyle education. 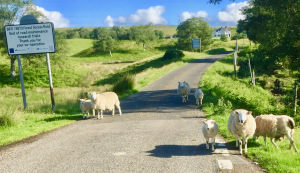 The world's human population now exceeds seven billion; in just five years, the number of farm animals reared for food globally has risen from 60 billion a year to just over 70 billion. Two out of three farm animals are now reared intensively.

The Good news next month
However, if all this has been a bit too miserable, especially for you carnivores, tune in to next months blog for the good news and how to make it happen.

Potentially this can mean good sustainable things, not only for our world and those suffering animals, but also for our health, vitality, cities, wilderness, conscience and longevity.

Have a Happy Christmas and enjoy whatever you choose to eat with your loved ones.